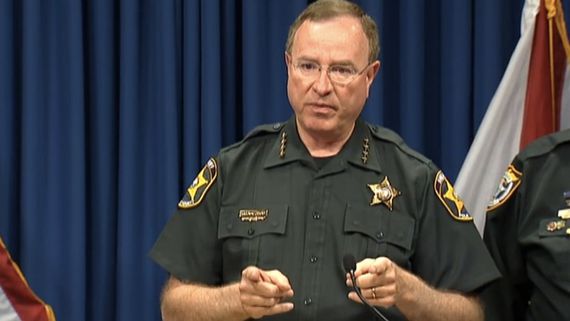 Polk County’s sheriff is sending out a call to arms. He says people should be armed and prepared just in case they are faced with an active shooter.

“The armed assailant doesn’t plan on you fighting back,” said Sheriff Grady Judd. “He plans on having a gun, doing all the shooting, and you’re just a sitting duck. Well, the ducks need to shoot back.”

Judd says citizens should have a concealed weapons permit and carry their gun with them whenever they can. He also says gun owners should keep their skills sharp.

And if a gun is not your thing, he says, you might consider another kind of weapon, like pepper spray or a Taser.

“If you’re not afraid of a gun, get one,” said the sheriff. “And if you need to shoot somebody, shoot ‘em a lot.”

Judd is on the same page as Brevard County Sheriff Wayne Ivey. Ivey posted the same message on Facebook, and it went viral.

Judd is doing more than talking the talk. He is walking the walk. In Florida, it is illegal to carry a weapon on a school campus. But a few months ago, he launched a first-of-its-kind program. He is training staffers at Southeastern University to shoot.

If an active shooter comes on campus, the staffers are automatically deputized, which means that they can do what they have been trained to do.

Brand new to Precision Holsters? Use discount code RKB10 for a 10% total savings to all new customers when checking out in your cart at www.precisionholsters.com